The Mexican Flag is the country’s most crucial patriotic symbol. Mexican people proudly display the flags all over the country. But do you know what the tri-color symbolizes? What does the image in the center mean? Read on to find out the adventurous, fascinating, and colorful background story of the Mexican Flag. 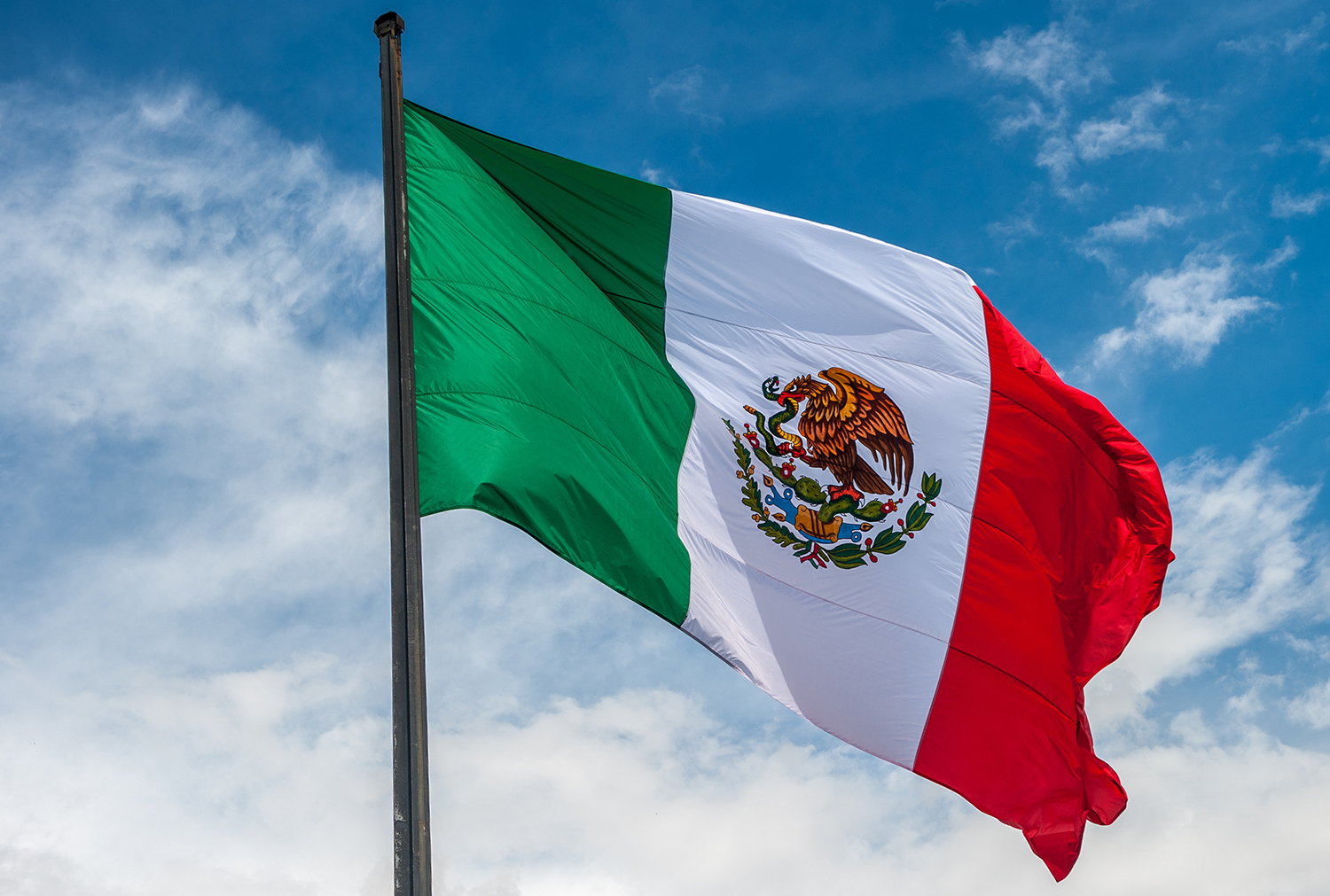 The story behind the Mexican Flag:

The Mexican Flag is vertically striped with the tricolour of green, white, and red. Firstly and most importantly, the central part of the white color is designed with the National coat of arms. The coat of arms attributes an eagle, a cactus, and a snake. During Mexico’s War of Independence (following independence from Spain,) Mexicans adopted these three colours. In 1821, The first National Flag was created; the design remains the same till now. However, most recently, in 1968, they revised the form of the coat of arms.

Though Mexicans created the first Mexican Flag during the pre-Hispanic period on August 13, 1530, Mexico has celebrated Flag Day every year since 1937.

The Mexican Flag has a very prosperous and colourful history. According to historians, the first national Flag of Mexico, initially adopted by the father of Mexican Independence, Miguel Hidalgo, on September 16, 1810. However, in these flags, the colours were the same as today’s Flag. But the eagle in the middle part is not holding a snake in its claws and has a crown above its head, signifying the empire. Subsequently, the Navy flags also had a diagonal tricolour pattern with a thin anchor in the centre and three eight-pointed gold stars in the corners. On the other hand, the military also used a similar square flag, but the eagle was more significant than the other national Flag. Mexicans Abandoned the Flag upon the abolishment of the empire.

The Mexicans established their first National Flag in the year of 1821. However, this Flag also had the same tricolour and emblem as the national coat of arms.

In 1823, the Mexicans adopted the second National Flag after the establishment of the first federal republic. Likewise, the only difference in this Flag was the central shield. There was no crown above the eagle’s head, and the eagle’s right claw held the serpent. Additionally, they added oak and laurel branches to the Flag. However, this Flag was discontinued in 1864.

In 1865, the Second Mexican Empire adopted the third National Flag. Similarly, the National Flag used the same tricolour pattern, the central part designed with the national coat of arms. But there were four eagles placed with the crown above their heads in each corner of the Flag.

The country adopted this latest National Flag on September 16, 1968, and on February 24, 1984, it was confirmed by law. However, the current version changed the design a little; the eagle’s position changed from front-facing to side-facing.

Before the adoption of the present national Flag, the government used the official Flag. But there was a problem with this official Flag. In 1968, Mexico hosted the Summer Olympic Games. At the same time, they legally abandoned using the plain tricolour flag for the merchant flag. However, the reason is that without the coat of arms, the Flag would look similar to the Italian Flag.

In 1984, there was also debate about how they would portray the coat of arms on the Flag’s reverse. Then, the PAN deputy proposed to change the law of the National Arms, Flag, and Anthem to place the eagle’s face to the right during the reverse display of the Flag.

However, in 1995, the government reproduced the reverse side of the National Flag. The golden eagle will appear standing on a cactus with its right claw, grasping the curved serpent on its beak and the left foot.

The meaning of the flag components

Central symbol: The coat of arms with an eagle, cactus and a snake. 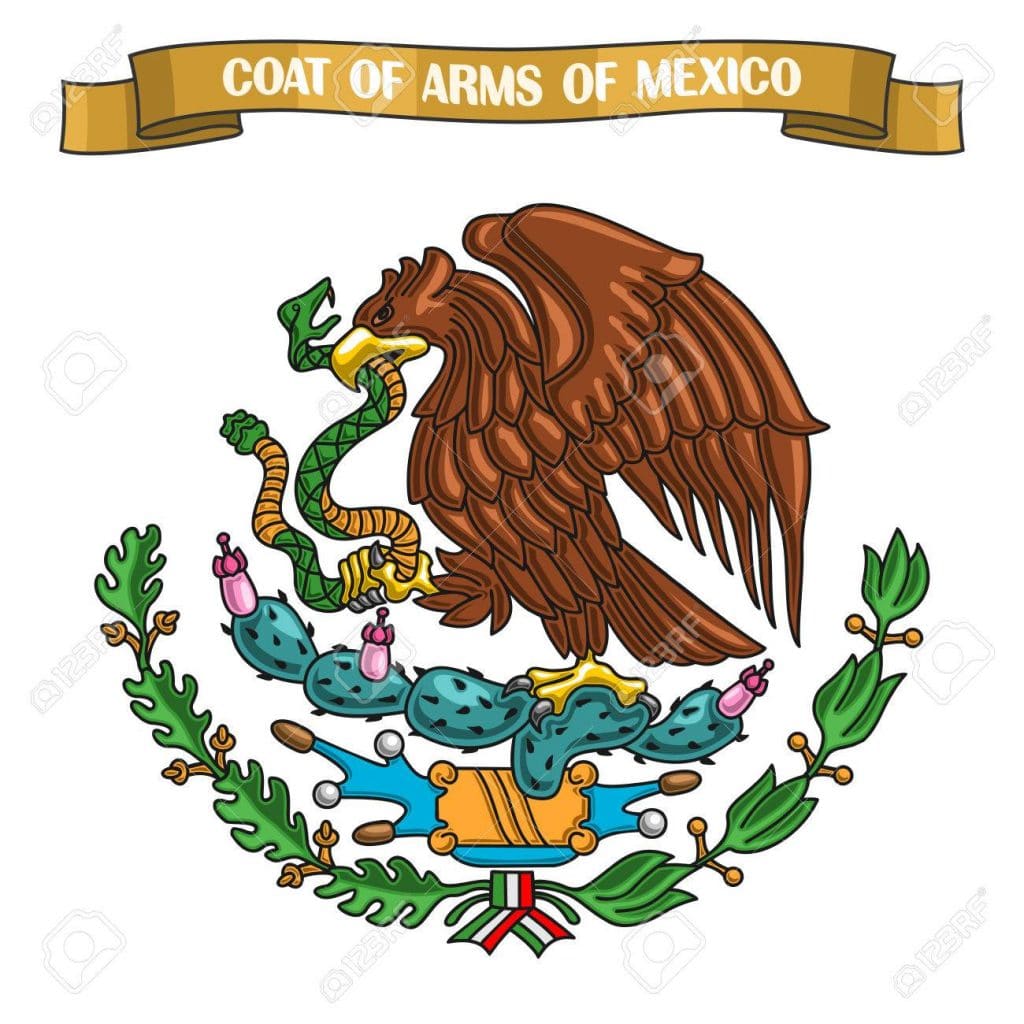 The Flag of Mexico has three vertical stripes of the colour green, white, and red. In 1821, the people of Mexico adopted this design when Mexico finally achieved independence from Spain. All these three colours had individual meanings accordingly. However, they chose the green colour to represent independence from Spain. Moreover, the red colour represented the union between the native peoples of Mexico and the elites of European heritage. On the other hand, the white colour stood for the purity of Roman Catholicism.

In today’s Mexican Flag, the green colour represents hope for the nation. Firstly and most importantly the white colour stands for unity, and on the other hand, red symbolizes the blood of those freedom fighters.

The eagle and the cactus:

The coat of arms in the Mexican Flag illustrates an eagle resting on its claw on a spiky cactus engulfing a rattlesnake. However, the eagle is situated in the middle of the white part of the Flag. According to them, this logo relates to the story of the founding of Tenochtitlan, the Aztec capital.

However, in the new version, the coat of arms with an oak and a laurel branch in the middle part of the flag indicates victory and glory underneath. However, in 1967 for the Summer Olympics in Mexico City, they added the image not to confuse the Italian Flag with their national Flag, which uses the same colour.

Rules or protocol to the Flag:

When the Mexican Flag is demonstrated in front of a crowd, the military must salute according to the military regulations. The civilians, the Mexicans, stand at attention with their arms placed flat and palm facing downwards in front of their chest as a salute.

Henry, Mexicans have celebrated flag day on February 24 every year since 1937. In schools, teachers taught the Mexican children to recite the oath to the Flag. 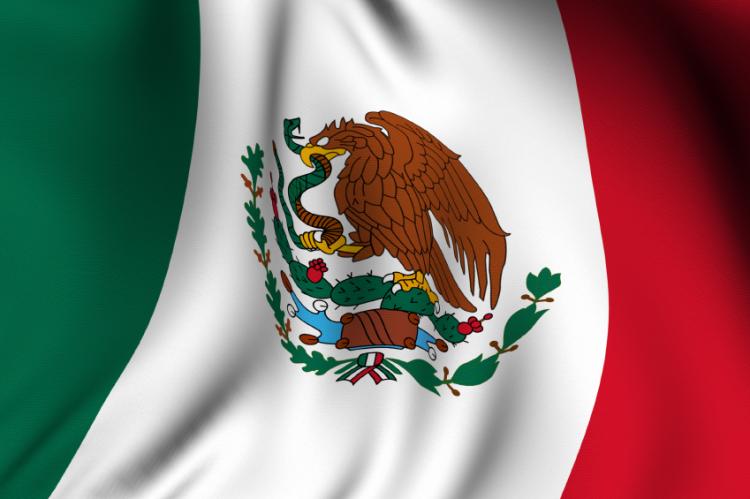 The oath to the Flag

Legacy of our heroes,

symbol of the unity

of our parents and our siblings.

We promise always to be loyal

to the principles of liberty and justice

that make our homeland

the independent nation, humane and generous

to which we give our existence.

Q. Why do Mexico and Italy have the same flag?

Ans. The coat of arms creates the difference between the Mexican flag and the Italian flag.

Q. What is the bird on the Mexican flag?

Ans. In this flag, the bird is a Mexican Eagle.

Q. Why is the eagle on the Mexican flag?

Ans. According to them, the eagle symbolizes Aztec heritage.

Q. What did the eagle mean to the Aztecs?

Ans. The sun and a victorious god Huitzilopochtli.

Q. What is a Mexican warrior called?

Q. Is it disrespectful to wear a Mexican flag?

Ans. The law of Mexico tells the citizen to use the flag respectfully with care.

Q. What does the snake in the Mexican flag represent?

Ans. The snake in the Mexican flag represents wisdom and creation. 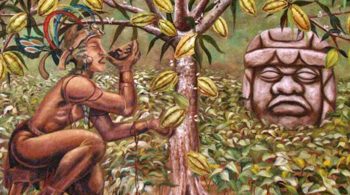 History and Timeline Of Chocolate