Home History What are the seven deadly sins ? In all probability, you must have definitely heard of the seven deadly sins. So, they are like some of the basic tenets of Christianity, or catholicism to be more specific. However, their origins are not very specific. We call the seven sins to be capital vices or cardinal sins as well. Therefore, these sins are what the Catholic Church back in the day considered to be the most severe and unforgivable sins. Hence, it is a grouping of vices that operate very well within Christian teachings. However, the Bible makes no mention of them. The Bible talks about the seven heavenly virtues and mentions nothing to make people afraid. So, it was an improvisation by the fathers of the Catholic Church who did this for their own benefit. It has little to do with the core of Christianity. 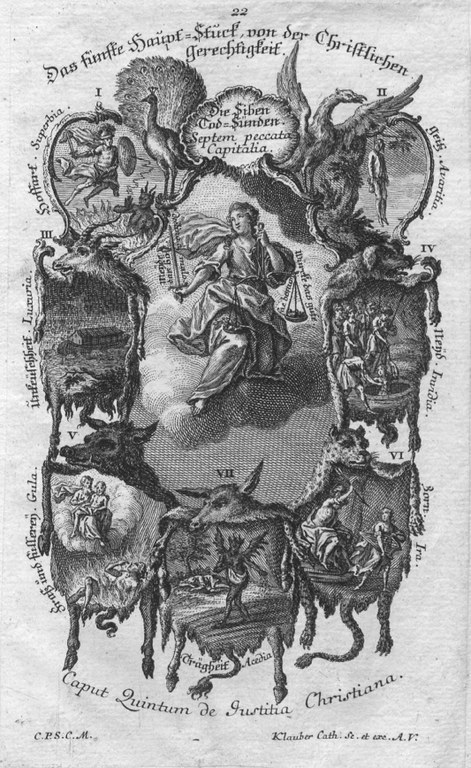 So, the church calls the seven deadly sins deadly because they believe such sins can deprive one of divine grace. This is because these behaviors or practices can make one very immoral in all walks of life. Hence, this would lead to the eternal condemnation of the human soul. The only way out is if one seeks forgiveness for the sin via repentance. Dante Alighieri in his famous book Divine Comedy listed how the seven deadly sins receive punishment in the circles of Hell and are purged in the Levels of Purgatory. So, there was a different circle and level for each sin. The most severe received punishment right at the womb of the Inferno to show its intensity. So, in opposition to the seven heavenly virtues, the seven deadly sins are pride, greed, wrath, envy, lust, gluttony, and sloth. We will see all of them individually.

So the first sin that we are going to check out is lust or luxuria. Let us take a quick look at its definition.

So, in his book Dante said lust to be the disordered love for individuals. Therefore, it means having a very strong desire for someone or something. However, it is the least of the seven deadly sins or capital sins. This is because it involves abuse of a faculty that is present not just in humans, but also in animals- that is flesh. Moreover, spiritual sins are always greater than sins of the flesh. However, in the religious view, lust might also mean spiritual blindness. So, it might be a ground from which other sins arise. 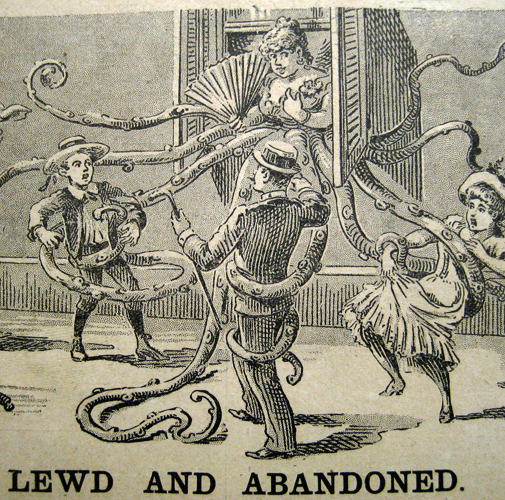 So, the symbol that represents lust is a goat. Now, why goats represent lust might be a little tricky. However, what we believe is that goats can start reproducing at a very early age. Therefore, they might be lusty creatures. Moreover, goats were one of the first domesticated animals. So, men had more goats around them than any other animal. Therefore, the goat might symbolize his wanting to have more goats, and hence lust. 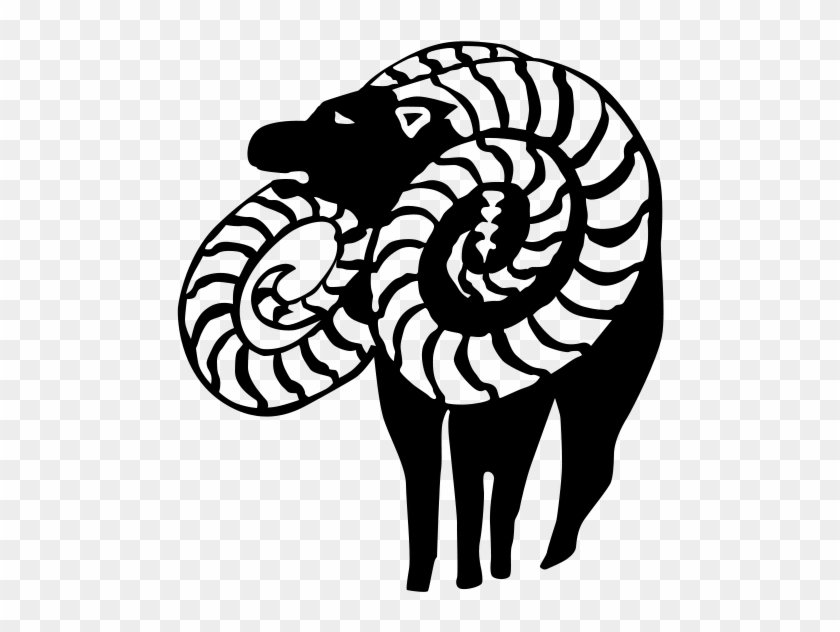 Let us see a few classical and biblical verses that talk about lust amongst the other seven deadly sins.

We also call this one of the seven deadly sins gula. Let us take a quick look at its definition.

So, gluttony is one of the most important of the seven deadly sins because it refers to overconsumption. Therefore it occurs only when one consumes more food and drink than they should. The reason why the Catholics thought this to be one of the seven deadly sins is very justified. So, this is because, in the Middle Ages, there was extensive misery and hunger. So, wasting food and overconsuming them while others starved to death was definitely a kind of sin.

The symbol that represents gluttony is a pig. So, the reason behind this is very simple. Pigs are famous for overeating. Therefore, they become loyal symbols of gluttony. In his Inferno, Dante placed those who sinned gluttony in the third circle of Hell. So, their punishment was to “wallow in disgusting mire created by eternally falling rain, hail, sleet, and snow.”

Let us see a few verses from the Bible that talk of gluttony as one of the seven deadly sins.

So, this one of the seven deadly sins is also called avaritia or avarice. Let us check its definition first.

So, greed is a kind of extreme longing that is quite unquenchable. Nothing satisfies it. However, in the seven deadly sins, greed refers to that of wealth, power as well as status. Moreover, the scriptures consider it to be the second most serious of the seven deadly sins. This is because those who are greedy can potentially influence others. So, they can corrupt, manipulate, and deceive others while also being corrupted, manipulated, and deceived themselves. 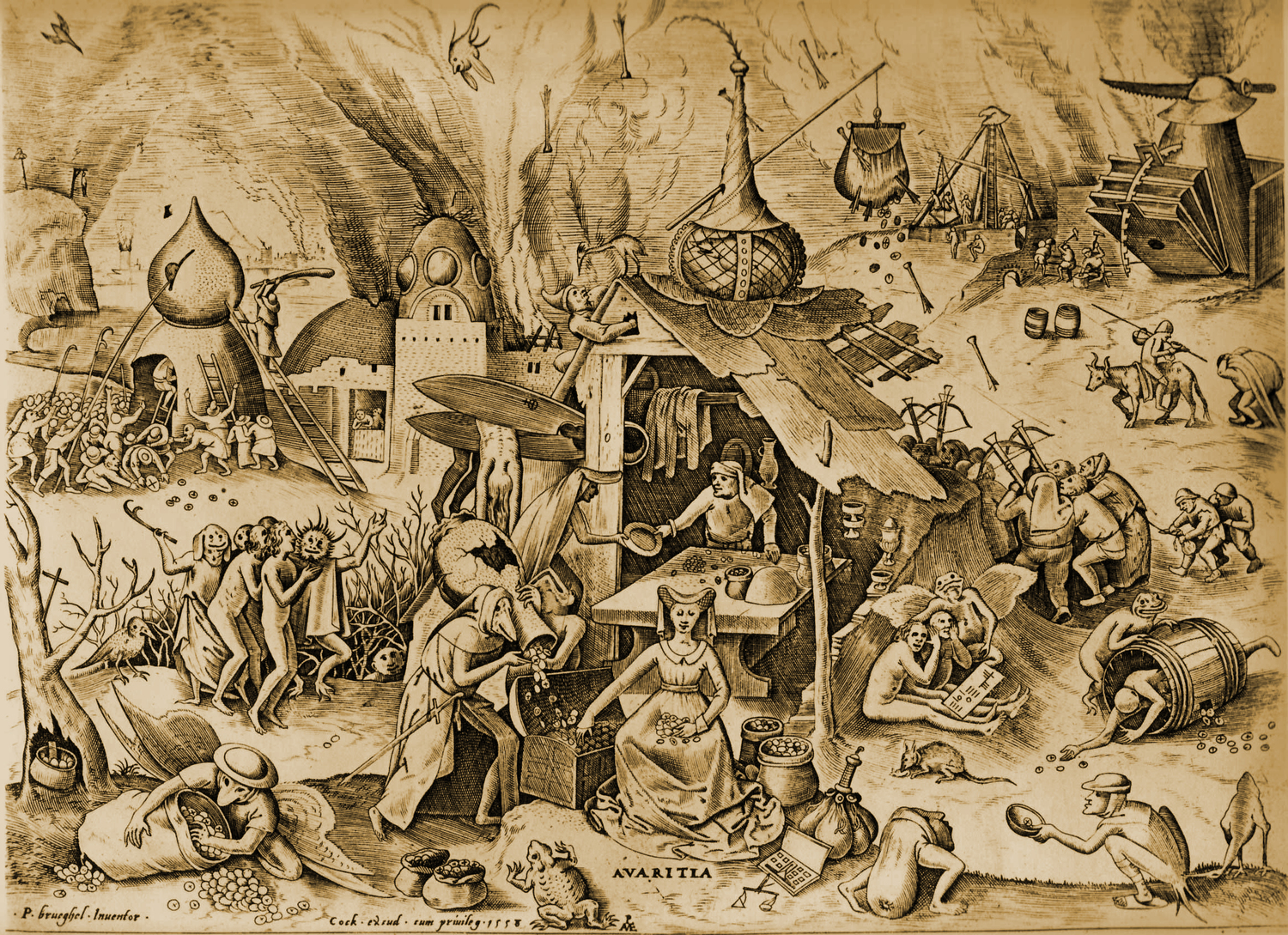 The symbol of greed is a toad or a frog. So, the idea behind this is that the toad is greedy for both the land and the water. It cannot satisfy itself in one place alone. 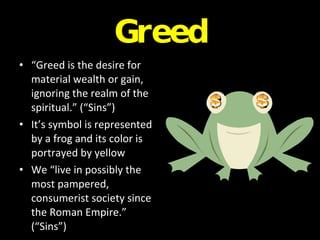 So, let us see what the scriptures had to tell about this sin of greed.

So, the scriptures also call this one of the seven deadly sins Acedia. Therefore, before we go further, let us take a quick look at its definition.

So, sloth is a characteristic of someone who is very slow, irresponsible, and never completes a task in time. Therefore, in the context of the seven deadly sins, it refers to someone who is unwilling to work. Moreover, he also neglects his religious and moral obligations. So, it is a waste of the very limited time that God has given us on this Earth. So sloth means the lack of ambition and love for ease. Therefore, the Catholic Church considers sloth to be one of the seven deadly sins. 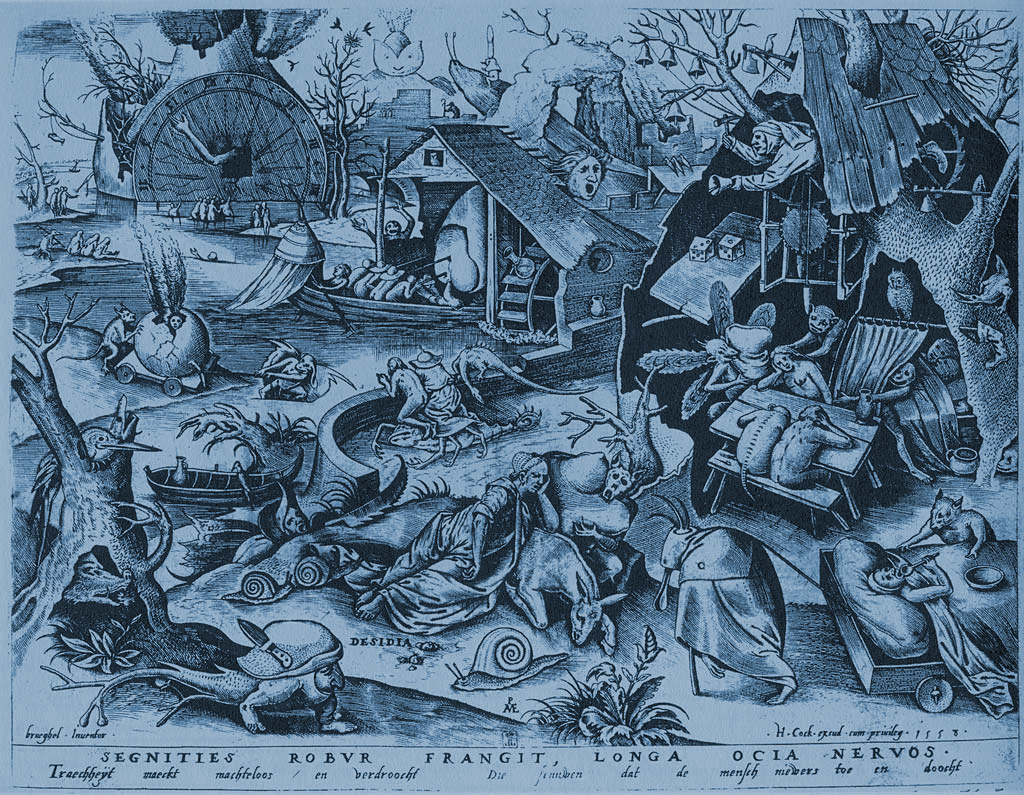 The symbol for sloth is a snail. So, the most common idea behind this might be the fact that snails are extremely slow. They have no ambition and hence are not very worthy creatures. 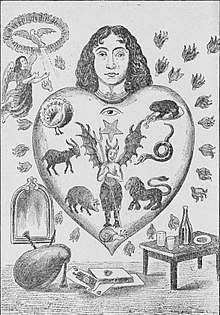 Let us take a quick look at how the scriptures define this sin.

So, the scriptures call wrath Ira as well. Therefore, let us take a quick look at its definition and then go through its symbol and verses following the pattern.

So, out of the seven deadly sins, this probably occurs to us the most. Therefore, the other name for wrath is anger which becomes very bitter on constant accumulation. So, it includes feelings of hatred, intense revenge, and even punitive desires. Moreover, the object of these can either be something or someone. However, it is a mortal sin because it is dangerous and can cause violence, if not murder. According to Dante, it is “distorting the love of justice into revenge and hatred.” Therefore, it might be something very natural yet something very sinful.

The symbol for this one of the seven deadly sins is a lion in the color red. Therefore, the symbol is quite self-explanatory. The lion is the king of the animal kingdom and is a generally very fierce and angry beast. Moreover, red always show passion and anger. 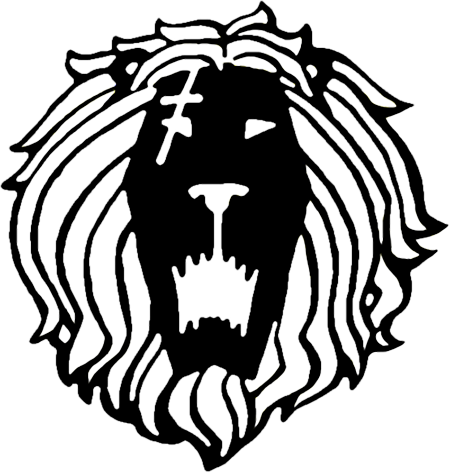 So, let us take a look at some quotes on wrath from the scriptures-

So, the other name in the texts for envy is invidia. Therefore, let us see what it means.

So, envy is another of the seven deadly sins we regularly have the chance to commit. Therefore, it is simply jealousy. Hence, it is the wish that we had something that we do not have and someone else has. The effect of committing this sin of envy is regret. Moreover, they want to deprive the ones who have it of it. Dante describes it beautifully when he says, “jealousy for our own well-being is perverted to deprive other men of their well-being.” 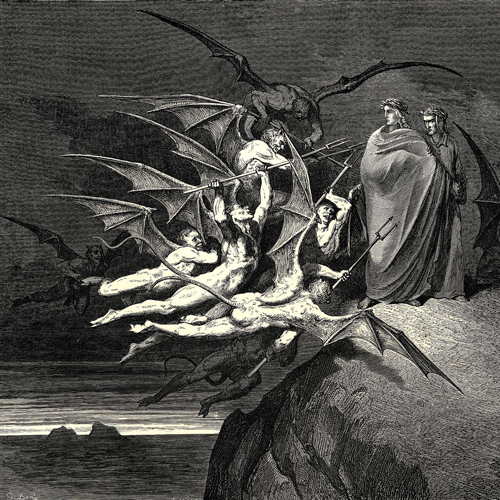 So, the symbol for envy is the snake because it is surreptitious. It moves under covers. Therefore, from here comes the idea that green means envy. We already know that green often represents the slithering, malicious nature of snakes. Therefore, let us now see what the scriptures have to say about this one of the seven deadly sins-

So, this is the last and seventh of the seven deadly sins. The scriptures also call it superbia. So, let us take a quick look at its definition and symbols as well as the verses that talk about it. 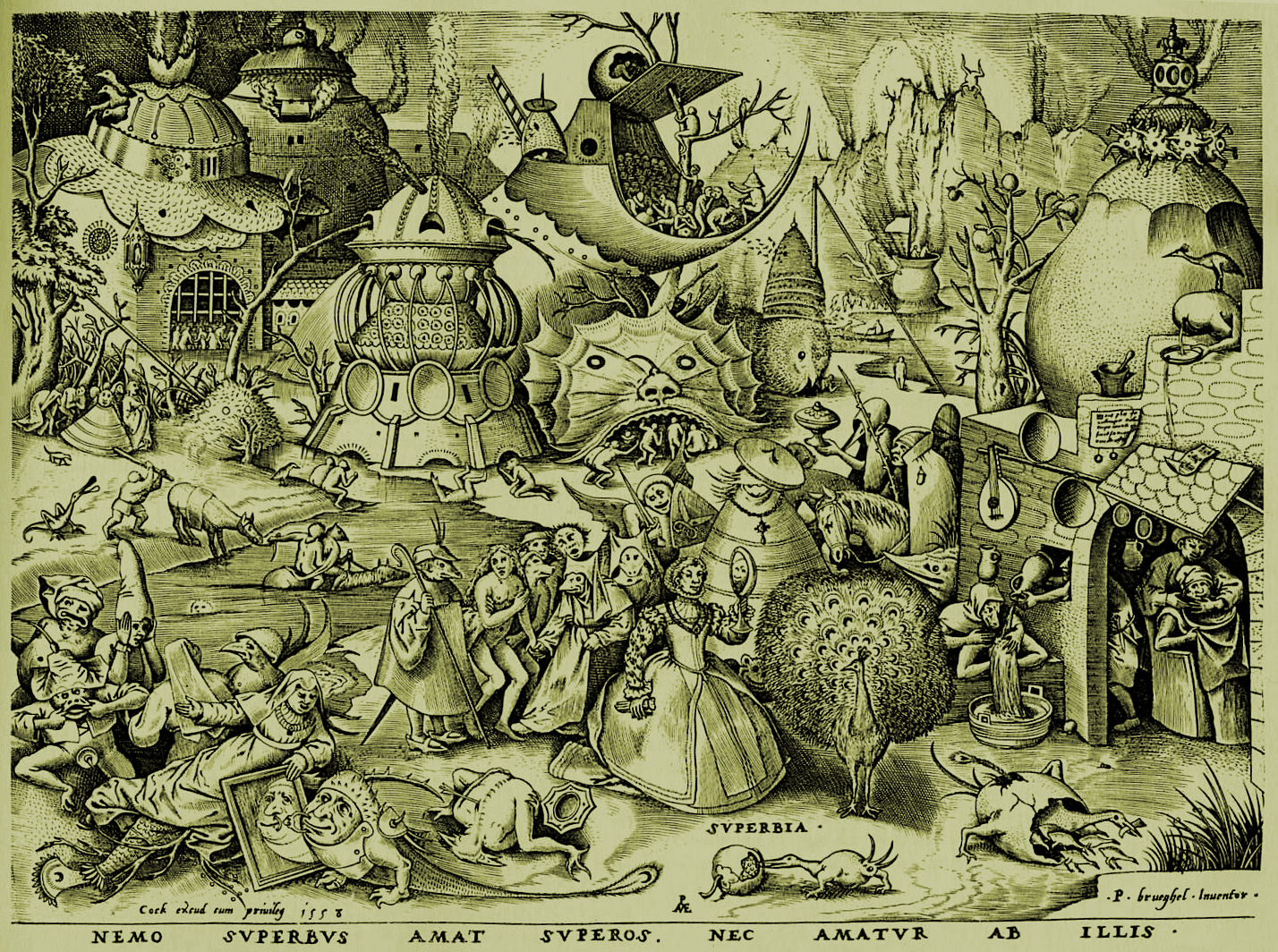 The symbol of pride is a peacock. So, this might be because the peacock has beautiful tail feathers and on rare times when it exhibits it, it does with utmost self-awareness and a show of confidence and haughtiness.

Let us see how the scriptures talk about pride.

What are the seven unforgivable sins in the Bible?

Ans. So, the seven deadly sins are pride, greed, lust, envy, gluttony, wrath, and sloth. However, the Bible never mentions any of these. The Roman Catholics made them up to counter the seven heavenly virtues that the Bible talks about in detail.

What does sloth mean in the seven deadly sins?

Ans. So, well sloth is the sin when you are unwilling to do something that you need to. Therefore, you are simply lazy about it. To know more in detail, scroll up and check out the “seven deadly sins sloth” section of the article.

What is the difference between sloth and acedia?

Ans. So, they are essentially the same. However, in general, sloth refers to physical laziness or slowness, or disengagement from action. On the other hand, when we refer to acedia, we are talking more about the mental sloth.

Ans. Greed is one of the seven deadly sins. The color that represents it along with envy is green, or dark green to be more particular.

What is the most powerful sin?

Ans. So, the most powerful of the seven deadly sins is pride. Its symbol is a lion.